My daughter invited her friend to make a doll party. So I decided to prepare something special for them. Irresistible cup of tea of its own kind. Made of egg, ham, cheese, topped with a pretzel and served on a cracker. Girls loved it! 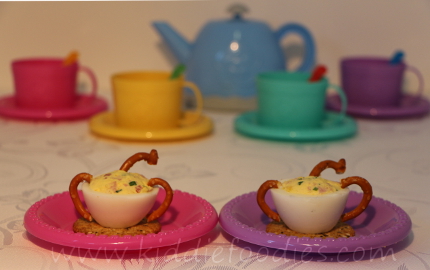 Did you know, that after water, tea is the most widely consumed beverage in the world?

Boil an egg for about 8-10min. When done, cool it with cold water. In the meantime, put the chopped ham and chive in a bowl. Cut the egg in half, remove the yolk from both parts and add it to the bowl. Add also a teaspoon of creamy cheese (such as Philadelphia). Then mix everything together using a spoon.

Place a cracker on a plate. Cut the bottom of the egg white, so that it holds on the cracker. With a spoon, put the mixture from Step1 inside the egg white. With your fingers, break the pretzels into 3 parts, as shown on the picture

and place them on the egg, to make a nice cup of tea. Do the same for the second egg. Enjoy!

Easter is approaching very fast, to be honest … END_OF_DOCUMENT_TOKEN_TO_BE_REPLACED

What are your New Year's resolutions? If one of … END_OF_DOCUMENT_TOKEN_TO_BE_REPLACED

As Christmas Eve is around the corner, I have … END_OF_DOCUMENT_TOKEN_TO_BE_REPLACED